Pulling real time data from the city government of Madrid, Into the Air is a project led by Nerea Calvillo (along with a team of architectural students, anthropologists, and designers) to map out air pollutants over the Spanish city.  The project was originally developed at Visualizar’08, an annual workshop/seminar that focused that year’s efforts on urban data visualization.

The 8mb Java applet tracks in real time five different air pollutants: Sulfur dioxide (SO2), Carbon monoxide (CO), Nitrogen oxide (NO), Particulate PM10, and Ozone (03).  Each of these contaminants was chosen based on its potential to cause serious health effects.  The applet has controls for zoom, tilt, menu options (to select the types of contaminants mapped and data stations), as well as a slider for selecting the time frame.  The autoplay function plays the mapped air pollutants back in time at one hour increments.

It’s fascinating to see the peaks and lows of air pollutants and how different contaminants peak in different areas of the city across the course of a day. 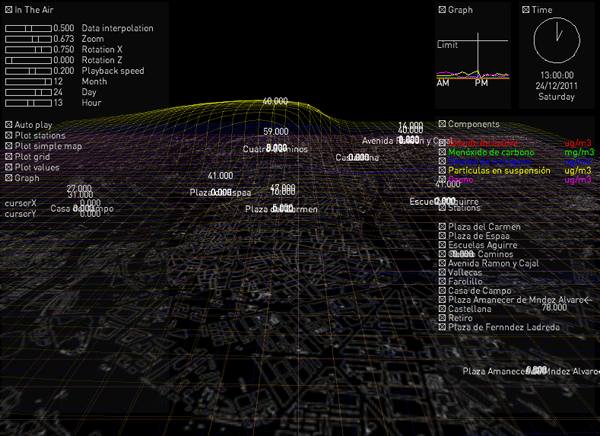 There is a prototype in the works for creating a physical version of the air mapping model that would the facade of buildings to display air pollutant levels:

The building would become a 24 hour active indicator of environmental conditions, blurring architecture with atmosphere, informing and mediating the bodies that come into contact with it.

Future plans include a physical air mapping prototype that would use the facades of buildings to indicated air pollution levels.

The site indicates that the code for the applet will be released shortly and invites those interested to visit the Processing sketch that was created for the project.  Budapest and Santiago de Chile have also had code developed for mapping out air pollutants.

How Much Science Can Happen !!!